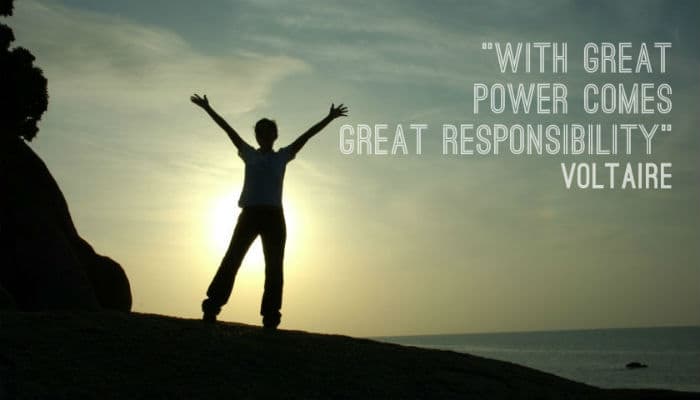 Almost everybody at sometime will receive a promotion at work. It may be a step up the career ladder within the same company or it may be from moving somewhere else. Either way, a promotion is a promotion and is a cause for celebration. Well, it is if the person who has got the promotion has got what it takes. Now we aren't talking sour grapes here it's just a fact that some are better leaders than others, and many go after promotion not completely aware of how much responsibility it actually involved. They often don't realise that they will be somewhat isolated now from the banter on the floor as they are 'a boss' and have to take that role very seriously. Voltaire sums it up perfectly in his quote “With great power comes great responsibility”, and these wise words are featured on the front of this Promotion ecard. The image shows the silhouette of a man standing on a cliff facing out to see with his hands aloft in what looks like celebration. Sending someone newly promoted these thoughtful business ecards is telling them you are pleased for them, and also gently reminding them of what they are taking on. What does your business do for their Christmas holiday marketing? If you haven’t already seen our holiday ecards for business then go look now before its too late.

View our all eCard themes
Personalize your eCard